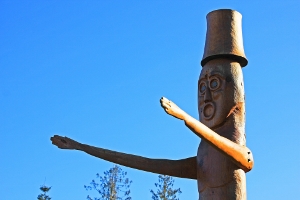 Honouring Figure carved by Johnny Aitken
As long ago as 3000 B.C. first nations people were fishing and living throughout a territory that we now refer to as the Salish Sea. Mayne Island is a part of this territory and at the southern entrance to Active Pass, lies Helen Point which has been cared for by the Tsartlip first Nations. It remains a significant place for the Tsartlip and for Mayne Island.
Spanish explorers visited in the late eighteenth century, giving Spanish names to Galiano, Juan de Fuca Strait and the San Juan Islands. In 1794 Captain George Vancouver camped on Georgina Point, where his crew left a coin and knife found over a century later by early settlers.

In the 1850s Captain George Richards of the Royal Navy began surveying the area aboard H.M.S. Plumper. He named our island after his lieutenant, Richard Charles Mayne, and he named the pass between Mayne and Galiano after his ship, but changed his mind when he learned that the American survey ship U.S.S. Active had been the first steam vessel to navigate the pass.

The earliest homesteaders registered land claims in the Miners Bay area in 1859. Miners Bay owes its name to adventurers bound for the Cariboo Gold Rush of 1858, the halfway stop between Vancouver Island and the mouth of the Fraser River.
Apple orchards were flourishing before the turn of the century and the Mayne Island King Apple was among the first planted in B.C. Richard Hall, the Tomato King, on his return from World War I, built a greenhouse so large the horse-drawn cultivators could be driven through it and the loading of his produce disrupted the schedules of the island steamers leaving Mayne. Japanese settlers followed his example and the greenhouse tomato business flourished until the start of World War II when the Japanese were forced to move away from the coast to other parts of Canada. Dinner Bay Park with its recreational facilities and a new Japanese Garden, is located on an old Japanese farm. This garden is dedicated to our early Japanese settlers.
Working farms began in the 1890′s, and in 1887, Canon Paddon founded the Church of St. Mary Magdalene. A little earlier, the Springwater Lodge opened, and in 1896 the Plumper Pass Lockup was built to cool off those whose tempers were not soothed by either church or saloon. The gaol is now a small museum.